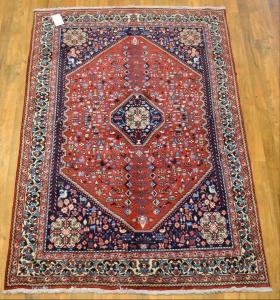 Hand knotted on vertical looms, Abadehs have cotton warps, wefts and wool piles. It is very regular and, combined with the normally good quality wool, it has considerable durability and aesthetic merit. The Persian knot is used at a density, which varies between 130 to 200 knots per square inch.

All Abadehs are of recent production, the carpet making craft in this area dating back only a few decades. However, this is not evident in the quality and appearance of the carpets themselves. The designs used are not those handed down from generation to generation and linked to tradition, but are copied from carpets from other regions of Iran. The classic Persian zil-i-soltan motif, which takes the form of a vase of roses usually repeated so as to cover the field completely, is the commonest motif in Abadehs. Another decoration frequently found derives from designs used by the Ghachgai tribe for their own carpets. This influence was the result of the Ghachgai tribe setting up its tents near Abadeh in the summer months.

In this type of Abadeh a single diamond shape, which is the principal decoration motif of Ghachgais, is used in the center of the field. All the rest of the carpets are decorated with small geometric designs. These are similar to the motifs used by the Fars tribe.

Abadeh borders are small by comparison with the field and two guards framing a main central band, which stands out by virtue of its different background colour, usually form them. The colours used are vivid: deep reds and cobalt blue with hints of ochre – a perfect tonal accompaniment to the simplicity of their designs.