Lavash (Armenian: լավաշ; Turkish: lavaş; Kurdish: nanê loş‎; Persian: لواش‎; Georgian: ლავაში)[note 1][7][8] is a soft, thin unleavenedflatbread[9] made in a tandoor and eaten all over the South Caucasus, Western Asia and the areas surrounding the Caspian Sea.[10][11][12] Lavash is one of the most widespread types of bread in Armenia, Azerbaijan, Iran and Turkey.[13][14]

In 2014, “Lavash, the preparation, meaning and appearance of traditional Armenian bread as an expression of culture” was inscribed in the UNESCO Representative List of the Intangible Cultural Heritage of Humanity.[15] In 2016, making and sharing flatbread (lavash, katyrma, jupka or yufka) in communities of Azerbaijan, Iran, Kazakhstan, Kyrgyzstan and Turkey was inscribed on the list as well.[16]

Most modern food specialists claim that it originated in Armenia,[17][18][19] whilst others state that it probably originated in the Middle East.[20] According to Peter Reinhart, “Lavash, though usually called Armenian flatbread, also has Iranian roots and is now eaten throughout the Middle East and around the world”.[21] In 2014, Lavash was described by the Intangible Cultural Heritage of Humanity as “an expression of Armenian culture”. This decision led to protests in Azerbaijan, Iran, Kyrgyzstan, and Kazakhstan as they claimed that the food was “regional”, not “Armenian”.[22][23]

If this interpretation is correct, the Armenian should be regarded as the source of the others. This is probable since, as Adjarian (HAB 2: 308a)[25] informs, *lavaš is considered to be Armenian bread in both Yerevan and Iran (being opposed with sangak for Turks and Persians), and in Tehran this bread is called nūn-i armanī ‘Armenian bread’. Similar data can be found also for other regions. In Dersim, for instance, lavaš is seen as characteristic for Armenian hospitality whereas the Kurdish entertain with sači hacʿ [Halaǰyan 1973: 294b].

Lavash is made with flour, water, and salt. The thickness of the bread varies depending on how thin it was rolled out. Toasted sesame seeds and/or poppy seeds are sometimes sprinkled on before baking. 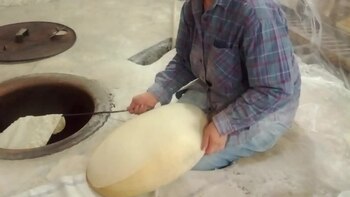 Traditionally the dough is rolled out flat and slapped against the hot walls of a clay oven. While quite flexible when fresh, lavash dries out quickly and becomes brittle and hard. The soft form is easier to use when making wrap sandwiches; however, the dry form can be used for long-term storage (almost one year) and is used instead of leavened bread in Eucharist traditions by the Armenian Apostolic Church. In Armenian villages, the dried lavash is stacked high in layers to be used later, and when the time comes to rehydrate the bread, it is sprinkled with water to make it softer again. In its dry form, left-over lavash is used in Iran to make quick meals after being rehydrated with water, butter and cheese. In Armenia the dried bread is broken up into khash. In Armenia fresh lavash is used to wrap Khorovats and to make wraps with herbs and cheese. In Iran, Turkey and middle-east lavash is used with kebabs to make dürüm wraps. According to the Encyclopedia International, “Common to all Armenians is their traditional unleavened bread, lavash, which is a staple in the Armenian diet.”[26]

In Sabirabad District of Azerbaijan after the wedding when the bride comes into her new house, her mother-in-law puts lavash on her shoulder and says: “Let you come to the house of wealth, let your foot be lucky”.[27] In the Novkhanisettlement, after a funeral, it is customary for people to prepare kyulchya, which sometimes consists of halva wrapped up in lavash.[28]

Women baking lavash is a common theme that has inspired Armenian painters. One such portrait by the famous Soviet-era painter Minas Minassian is displayed at the National Museum of Art in Yerevan. A print of the painting Armenian Ladies Baking Lavash by Armenian American artist Manuel Tolegian was selected by U.S. President Gerald Ford to hang in the White House Bicentennial Collection. The weekend open-air arts-and-crafts market in downtown Yerevan offers many lavash-related paintings and handiworks, with renditions of happy women making lavash having become a common sight