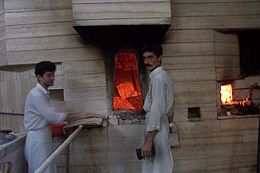 Two bakers are baking Sangak bread in a traditional oven

Its name consists of two parts: ‘Sang’ in Persian means stone or pebble and ‘sangak’ means little stone. The bread is baked on a bed of small river stones in an oven. There are, normally, two varieties of this bread offered at Iranian bakeries: the generic one which has no toppings; and the more expensive variety which is seed bread (this is, topped with poppy seeds and/or sesame seeds).[3]

Sangak bread was traditionally the bread of the Persian army. It is mentioned for the first time in the 11th century. Each soldier carried a small quantity of pebbles which at camp were brought together with the “sangak oven” and used to cook the bread for the entire army. It was eaten along with lamb kabab.

The bread has always been widely eaten in the territory of present day Iran and Azerbaijan, but following the Soviet takeover in 1920, the bread fell into some disuse.[4] Because sangak is made by hand, the Soviets opted for mass production of loaves, an option which was not doable for sangak bread.[4] Sangak in neighboring Iran however, remained having its same popularity.