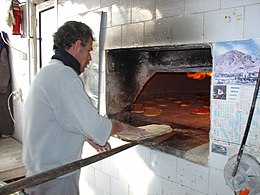 Barbari bread (Persian: نان بربری‎ translit. Nān-e Barbari) is a type of Iranian flatbread. It is one of the thickest flat breads. It is widely known as Persian Flatbread in United States and Canada.[1][2]

Barbari means “of or related to Barbars” in Persian. Barbars are a group of people living in Khorasan near eastern borders of Iran. According to Dehkhoda Dictionary of Persian Language, this bread was baked by the Barbar (Hazara) people and was brought to Tehran, becoming popular during the Qajar period. In Iran, the Hazaras were known as Barbari (“barbarian,” “foreign,” “uncivilized”), which they resented. Reza Shah of Iran granted them the name of Khavari (“Easterners”) through a decree, and since then, the name Barbari has been abandoned and no longer applies to the ethnic group. However, the bread is still referred to as Nan-e Barbari (bread made by the Barbarians) in Iran while Hazaras refer to it as Nan-e Tandoori (bread made in the Tandoor oven).[3]

The bread is usually between 70 cm to 80 cm long, and 25 cm to 30 cm wide.[4] It is the most common style baked in Iran. It is served in many restaurants with Lighvan cheese, of ewe’s milk, similar to feta cheese.[5]