Religion and Culture in Ancient Iran 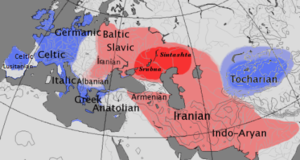 The beliefs, activities, and cultural events of the ancient Iranians in ancient Iran are complex matters. The ancient Iranians made references to a combination of several Aryans and non-Aryan tribes. Aryans, or ancient Iranians, worshiped natural elements such as the sun, sunlight and thunder, but they eventually shifted their attention mostly to a single god, whilst acknowledging others. The Iranian ancient prophet, Zoroaster, reformed Iranian religious beliefs to a form of Henotheism. The Gathas, hymns of Zoroaster’s Avesta, brought monotheistic ideas to Persia, while through the Yashts and Yasna, mentions are made to Polytheism and earlier creeds. The Vedas and the Avesta have both served researchers as important resources in discovering early Aryan beliefs and ideas.[1]